Many people assume that they need better cameras because, despite the majesty of the mountain range or solitude of the quiet sunrise in front of their lenses, their photographs don’t quite measure up to their expectations. “If only I had that expensive Hasselblad, Nikon or Canon, my photographs would more clearly show the wonders of the world I photograph.” But don’t believe the hype in all of those camera ads. In fact, the most expensive camera and lens available will not take a clear photograph of your subject!

Oh sure, an expensive camera and lens might resolve more detail in the timberline, and might automatically pick the perfect exposure setting to record the details in the morning sun’s rays, but you’re missing the point altogether. The subject for most good photography is not even seen in the viewfinder. The real subject of most photography is your response to the scene in front of you.  “Oh, sure,” you think, “but if I respond so clearly to what’s in front of the camera, I need to take a sharper photograph of it so others will see it too.”

But in fact, you are not responding only to the scene in front of you!  You’re responding to the warmth of the sun hitting your face, the sounds of the wind in the trees, the earthy smell of the rich humus at your feet, your memories of similar sunrises, photographs you’ve seen of mountain ranges in China, and even how this morning’s walk in the woods calmed your nerves after the fight you had with your boss yesterday.  Your response is ACTUALLY to the nearly infinite memories, emotions, and multi-sensory stimuli you’ve got packed into your head.  How can your $10,000 camera system focus sharply on ALL THAT?

Your subject is much larger than what you you first thought, and here you are trying to explain it through a single flat B&W rectangle.  Once you understand the immense difficulty of that, you realize that a few high-tech bits of metal, plastic and glass aren’t enough to do the job.  You need a VISION.  And with a clear vision, your photography improves immensely.

On an early December morning in 2012, I was out exploring the Oak Hill area of the Cuyahoga National Park.  It was a quiet, cool, misty morning when I stumbled upon this view of Chesnut Pond.

The scene was dismal (and this was in full color)!  It suddenly struck me that the autumn of 2012 was over.  The crispy fall weather was gone.  The brightly colored leaves had fallen in preparation for the snow, the wildflowers had gone to seed, and even the birds had taken wing on their seasonal migration southward. Winter was bearing down with its cold damp hand.  A strong feeling of melancholy overtook me as I looked at the scene.  And yet in the back of my mind, I was vaguely aware that this, too, was just another cycle in the natural world.  Winter was coming, but it would be replaced in a few months with a life-filled spring.  How do I express all the melancholy tinged with the hope of new life?  And do it in a “single flat B&W rectangle”? 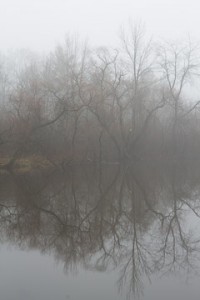 I began to clarify my vision.  I decided that the leafless trees reflecting in the pond was an essential part of the vision.  After all, I was reflecting upon the past seasons as well.  As I tried to isolate the parts of the scene to include, I immediately realized that the obvious “X” formed by the trees (and their reflection) in the right part of the scene would help to set the melancholy mood.  (In fact the “X” may have helped to trigger the melancholy response in the first place.)  The slight mist helped to set the tone, and I knew that the overall tone of the image needed to be lighter rather than darker.  After many considerations, I ended up making this exposure.

Considerable time was taken to edit the photograph so that it might more closely reflect my first feelings when I came upon the pond.  Was I successful?  I am basically content with the way I carried out my vision.  But you are the final judge.  Let me know what YOU think.

Incidentally, I plan to make other posts which will show a scene that I came upon, and then show my interpretation of it.  Sometimes I talk too much, and in those posts, the photographs will do most of the talking.