The camera and lens do not record things in the same way as the eye and mind do. The camera lens produces an image on a flat sensor (or film). But the back of the eyeball is round! The images on the two cannot match. Moreover, the mind doesn’t just “blindly” accept the physical image that the eye produces–it adjusts the image so that it can be easily interpreted. (This is the reason optical illusions trick the mind.)

And on top of that, a camera lens introduces its own complex distortions to compound the problem, and those distortions become more extreme near the edges of the frame. Moreover, the edges of the photograph are parallel with each other and have square corners. This makes all the distortions and perspective issues even more noticeable. The building may even appear to fall away from the viewer.

Let’s look at an example. I recently made an image called “Cleveland Sunrise” After all the usual adjustments I make, it came out looking something like this: 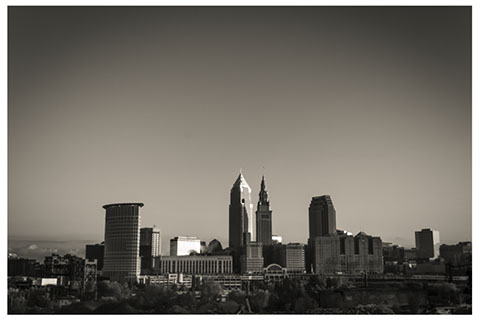 Can you see the distortion? Let’s crop the picture just a bit:

Can you see it now? If you can’t, let’s look at just the left and right buildings a little closer: 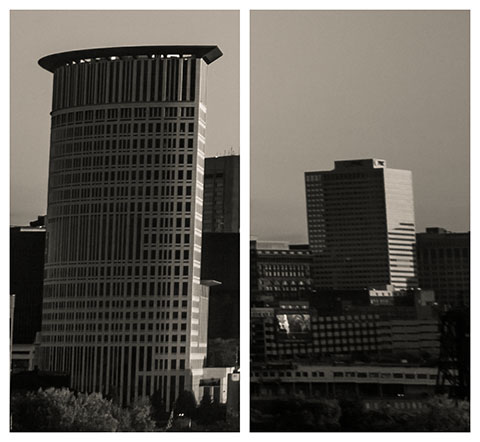 Leaning towers of Cleveland? No just normal “distortion” and perspective catching up with the camera. The lens I used was the basic lens that came with the camera, and it is supposed to have pretty minimal distortion. It is not a “fisheye” lens in any sense of the word! It is operating the same way as virtually any normal lens would.

What can be done to correct this problem? Well, in most cases the problem isn’t that extreme, and most people just accept the photograph’s “distortions”. But for professionals and “sticklers to detail” (like me) there are several ways to correct the problem. This can be corrected in several ways. You can use a view camera (a large “old-fashioned” camera with the photographer hiding under a cloth). This camera can actually bend and shift in the middle to correct this type of problem. Or some photographers use a very expensive “tilt-shift” lens to do the same thing on a regular SLR (single lens reflex) camera. I don’t use either, but I do have Lightroom (LR) software!

Lightroom has “Lens Correction” adjustments which can stretch out parts of the image to correct the problem.  See how it stretches the photograph: 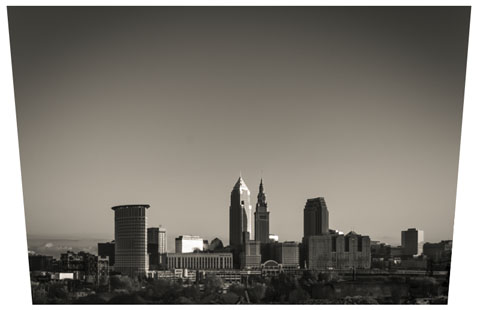 Let’s crop the image so that it looks “normal”:

Now let’s look at the buildings I zoomed in on earlier: 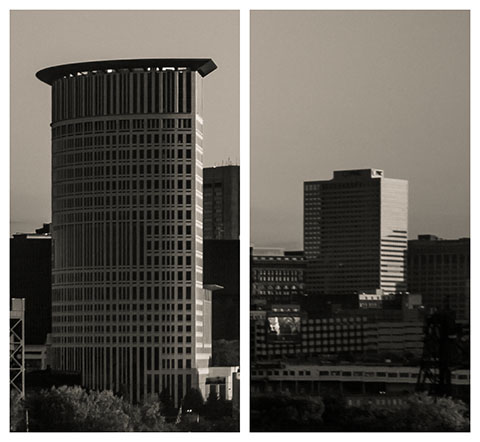 Now they look much more conventional. The “improvement” may be a bit subtle for some people unfamiliar with the issue, but the buildings (and now the entire photograph) look more stable. And in fact, I feel it looks much more like the buildings I saw!

Some people may like to experiment with other looks.  You can emphasize the original “distortion” by making it more extreme:

This look may be appropriate for expressing some photographers’ vision.

On the other hand, some photographers may prefer a different look. You can also “overcorrect” the original image. In this case, the buildings will tilt outward:

It is amazing to see how one slider can change the look of the entire image. Each photographer needs to use his/her tools to help express their vision of the scene. Since I wanted a solid-feeling, stable-looking set of buildings, I corrected the image to result in that look. Other photographers may go a different way.

I consider lens corrections whenever I have an image with parallel (or nearly parallel) vertical lines in it.  And there are times when I even need to make horizontal lines parallel (which requires the “Horizontal” slider to be moved).  At any rate, you should consider how the camera and software may introduce “distortions” into the image, and how those distortions can either be emphasized or corrected to match your vision.

Here is the final result for “Cleveland Sunrise” as I wanted to present it: 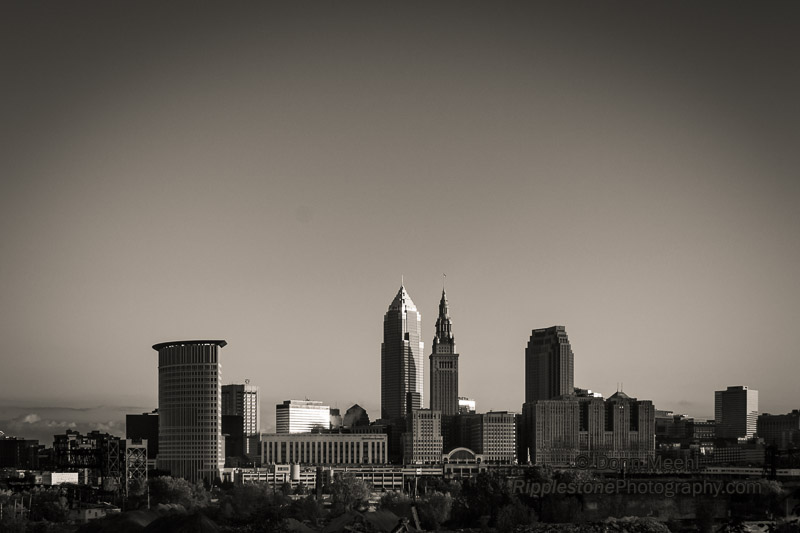